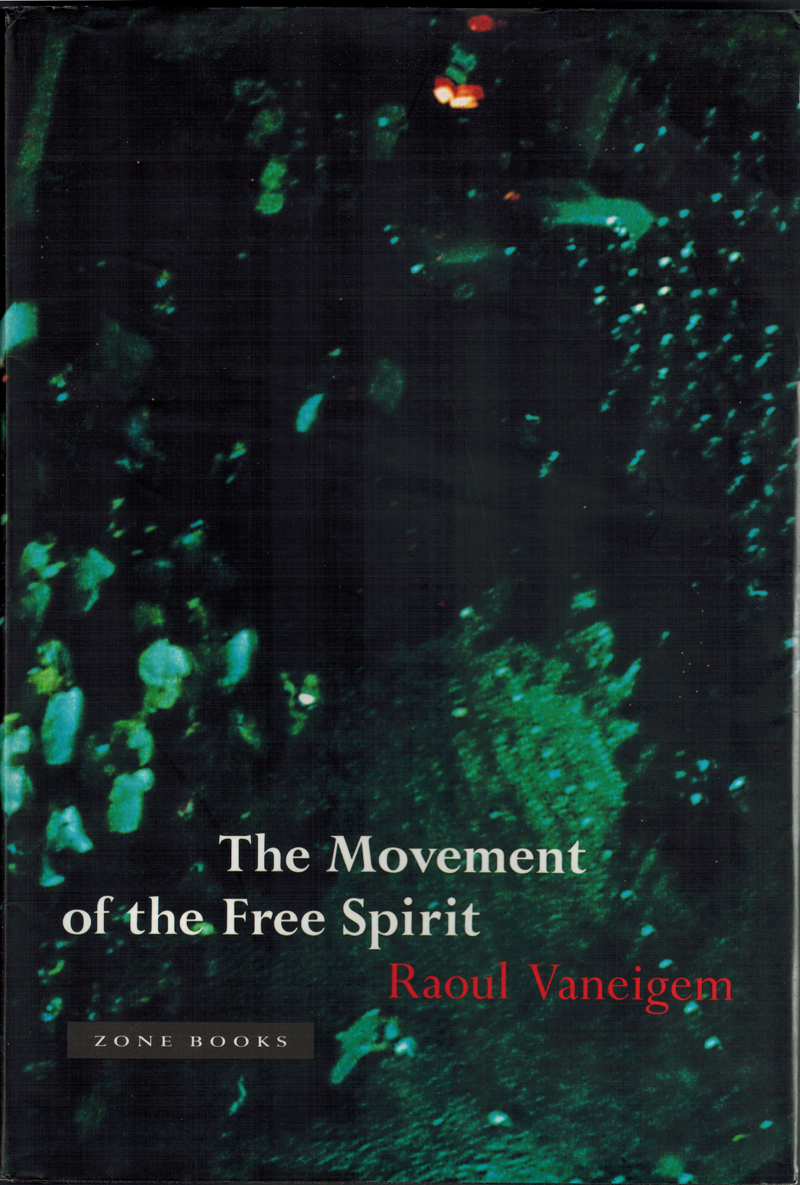 131 — Vaneigem, R. (1986). The movement of the free spirit. Several considerations and firsthand testimony concerning some brief flowerings of life in the Middle Ages, the Renaissance and, incidentally, our own time. R. Cherry and I. Patterson, trans. New York: Zone Books, 1994. 25 November 1995, Philadelphia.

« The decline and fall of totalitarian regimes has pointed up the underlying totalitarianism of ideologies that only yesterday were able to buttress their credibility with vocabularies of emancipation. With the crumbling of the old dichotomy between Eastern bureaucratic despotism and Western democratic bureaucracy, one thing has become perfectly clear: all ideologies are totalitarian. Cut off from the very life they are supposed to represent in the spectacle, they invariably take over a repressive power that has been in place for thousands of years: the power of heaven over earth, of the spirit over the body, of lucrative labor over creative pleasure » (p. 7).

« Not until that glad hour when we are at last rid of our delusions about the science of the experts, and are content simply to choose among pleasures, can we face the unknown with a lucid, passionate gaze » (p. 12).

« But readers who take pleasure in paying history the same undivided attention they pay the struggles of their own passions will discover a naive but valuable confirmation in this book: lies serve their own purposes, their own ends; while the love of pleasure has none » (p. 13).

« Economics has been the most durable lie of the approximately ten millennia mistakenly accepted as history. From it stem all those eternal truths and sacred causes that have governed master and slave alike, truths and causes to which generations, born simply to live, have been wantonly sacrificed » (p. 18).

« We make our way forward in an upside-down world that many still persist in taking for reality — for the only reality. And the driving force behind this inversion is fueled by the very thing that recognizes only those who accept their own abjection, namely work » (p. 26).

« I use the term inverted perspective, or market perspective, to describe the state in which pleasure is repressed because it is seen as a force hostile to work and to the civilization of work. It is a state in which life degenerates into survival; and pleasures, carefully proscribed, appear only as mortal wounds. It is a civilization in which the freedom and openness of life are considered absolute evils, forced back into the night of negativity, burdened with anguish and guilt and driven to forms of release that pay tribute only to death » (p. 27).

« Nature cannot be liberated from the economy until the economy has been driven out of human life » (p. 33).

« Theology (the language of the gods) and philosophy (the language of men) are both moments in a single progression. They are both nothing more than ways of abstracting life. Thus spiritual and temporal power vie with one another in order to carry out one goal: to perpetuate slavery » (p. 45).

« Words only have importance in life where they are forgotten and only have charm at the moment when they give way to the eloquent silence of the gestures of love » (p. 46).